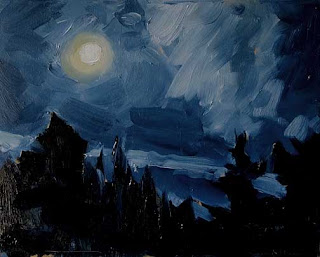 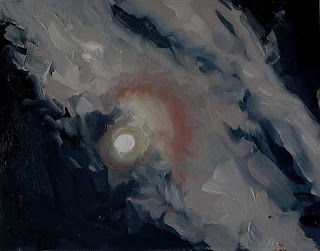 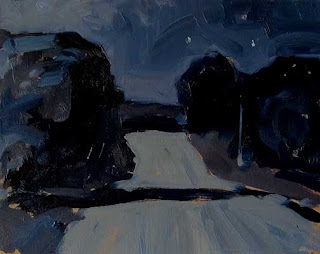 "Full Moon -- Scott Road" -- plein air field study -- oil on birch panel 8x10"
The other night the full moon was glorious!  I tend to hit the sheets pretty early, but I was just WIRED!  How could I possibly sleep when it was so beautiful outside??  I'd never painted en plein air during a full moon, but nothing was going to stop me.
Since you see only 3 values during a full moon, the darkest dark, a medium sky tone and the bright moon, painting is relatively easy.  I pre-mixed a dark-dark and a medium tone in the studio before I ventured out.  Once out on location, I only had to turn on my flashlight a relatively few times to see what I was doing.
First stop was my favorite hang-out, Rex Beach.  You can drive right down to the water.  As usual, I had the entire park -- hell! the entire coastline! -- to myself.  Normally I park back in the parking lot, but I felt daring enough to park on the sand.  Sometimes people get stuck there, so I very carefully cruised through in low gear.  It was SO wonderful to be down at the water's edge, painting!  All I could hear was gentle waves and once in a while a coyote yipping.  Still, I did look around once in a while for any approaching cougars.
A big cloud moved over the sky and as it passed under the moon, I was amazed to see the rusty tones and hints of ochre!  Very bizarre.
I only had 3 panels with me, so the last painting was done on my road: Scott Road.  I could have painted ALL NIGHT.  Really a blast!  Maybe this winter I'll try doing it in the snow.
Posted by Charlevoix Sax Quartet at 4:58 AM