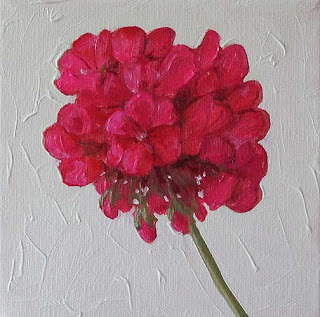 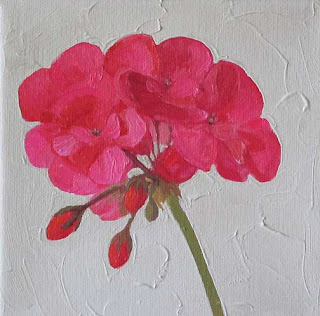 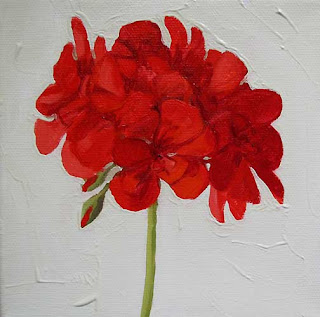 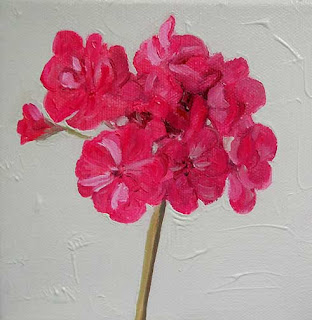 "Geranium #4" -- oil on canvas 6x6"
The windowsills in my studio building are lined with pots of geraniums.  Some are 5 years old.  Some were picked up out of the trash and potted.  I haul them out to the patio in June and haul back into the studio in September.  They seem to like the south light and bloom like crazy all winter.  After painting some roses, I thought why not try painting geraniums?  My friend Jerry dislikes geraniums, calling them "old lady flowers".  But I love their colors!
Some colors can't be mixed.  The great still life painter, Janet Fish, said that she owns every shade of red and yellow that's made.  One of the tube colors that I've found invaluable for times like this is "Aurora Pink".  It's a neon-pink that is dazzling.  Most pinks are impossible to mix.  Red and white oil paint, mixed, usually turns muddy.
For about the first 95% of the painting, it looks like a dreadful mess.  Just blobs of color.  It's the last few strokes of detail that make them look like anything recognizable.  Again, a good part of making a successful painting is controlling one's panic!
Decided I needed more different colored models to work from, so I drove to Pine Hill Nursery for more last night.  They're only 10 minutes away.  My favorite store!

Posted by Charlevoix Sax Quartet at 5:12 AM No comments: