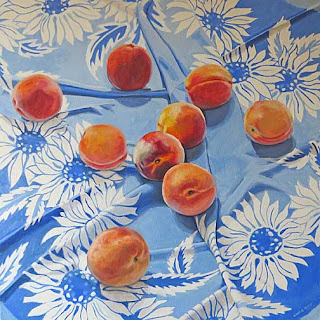 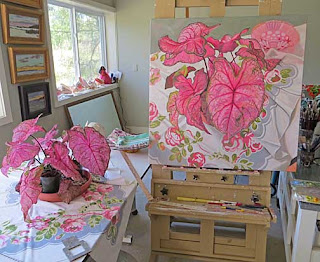 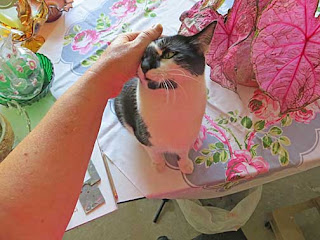 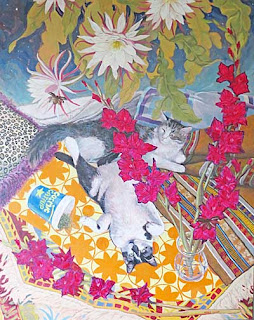 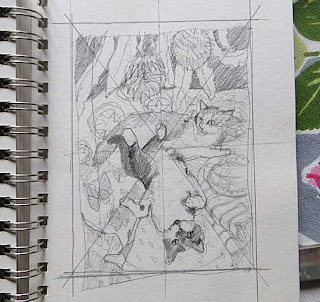 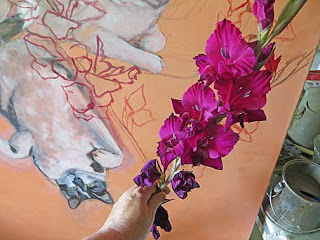 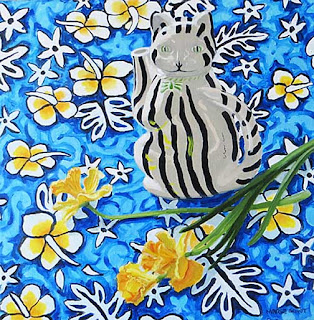 "Striped Cat Teapot on Batik Shawl" -- oil on canvas 18x18" -- Margie Guyot
Here it is, dead of winter in Northern Michigan, and the temperature's in the teens.  So why not paint a "springy" type painting with daffodils (OK, so they're silk!) and a bright batik sarong?  I love this teapot (I'd used it in a recent painting already) and the whole thing kind of brightened things up around here this week.  ﻿
﻿
Posted by Charlevoix Sax Quartet at 1:51 PM No comments: 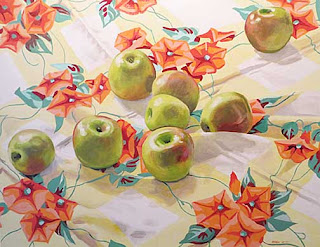 "Granny Smiths on an Orange Morning Glory Cloth" -- oil on canvas 22x28" -- Margie Guyot
Everybody thinks of Granny Smith apples as being pure green.  Well, not always!  I recently found a bag of locally-grown ones, produced by Friske's Orchards, that had a surprising amount of red tones.  I knew I'd have to use them in a painting.  Notice the bruise on the apple on the far left?
The vintage tablecloth is rather unusual, too.  I'd been rifling through a big stack of tablecloths at an antique show in Petoskey when I spied it.  All the others were the usual, predictable combinations of red and blue -- and they all looked alike.  I just loved the orange tones!
I always paint under natural light, setting up my still life compositions on a big table next to the windows on the south side of my studio.  Some artists love the constant, cool light of a north window, but I love the intensity of the south light, with its strong sunlight and shadow patterns.  Which you don't really see here this time.  Alas, northern Michigan skies are overcast pretty much all the time in winter!  Some days I had to quit painting at 3 PM, it was so dark I couldn't see the colors properly.
Apples are so much fun to paint!  So reflective!  And I love the vintage tablecloths.  The folds and wrinkles are challenging, which I enjoy.  Why waste time painting stuff that's too easy?       ﻿

Posted by Charlevoix Sax Quartet at 4:20 AM No comments: 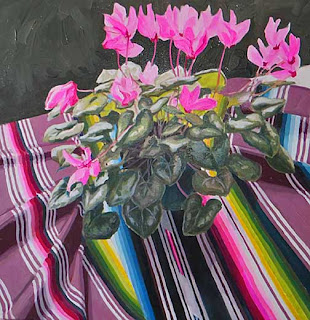 It's surprising how long I've managed to keep this pink cyclamen alive!  It's been what -- 6 weeks? -- since I bought it on sale at Pine Hill Nursery. Every once in a while I'll come into the studio to find it horribly wilted, flowers all laying down.  I'll give it some water and within hours, it looks bright and perky again.  So I just had to use it in another painting before it finally croaks.

My painter friend, Al Maciag, gave me some horse blankets he'd picked up in a garage sale.  I liked this one because of the pink stripes.  But I quickly realized how difficult this painting would be!  I always love to toss the fabric down onto the work table and let the folds fall naturally.  Just try painting stripes on folds!  It got to be pretty challenging.

Painting lots of leaves is not my favorite thing to do, but there's not much else to do up here in the far north, in winter.  No TV reception, gardening season is over, so it becomes a choice of "do I want to clean house" or paint.
Posted by Charlevoix Sax Quartet at 4:54 AM 1 comment: